�
�
FREE SAME-DAY DELIVERY (OVER $30)! ENTER COUPON CODE WELCOME20 AT CHECKOUT FOR 20% OFF YOUR FIRST ONLINE ORDER. CLICK HERE FOR DETAILS. 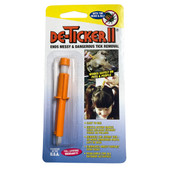 The De-Ticker was designed to grab the tick and hold it—spring loaded—without destroying it, allowing a turning motion of the device with the tick. When ticks attach to the host, the “mouthpart” (generally referred to as the head) is inserted into the skin. It is covered with a large number of fishhook-like barbs, which resist being pulled out. Using force and pulling generally result in the mouthpart or even larger parts of the tick tearing off and remaining imbedded in the host, causing all kinds of problems including infections. The barbs do not resist the “gentle-turning method” of the De-Ticker. After 3 to 5 turns, the barbs have widened the hole in the skin sufficiently, to allow the tick to slide out of the host, easily, completely and consistently.

Note: Tweezers, fingernails, or similar are unable to perform this task, which requires simultaneous grabbing and turning of the tick. The wrist itself is unable to turn more than half a turn.Correct tick removal requires three or more consistent and continuous turns without letting go in between. Therefore, a suitable device like the De-Ticker is needed for correct tick removal by turning instead of pulling.

The pressure of the spring-loaded claws of the De-Ticker is designed to hold the tick firmly for removal, but will not destroy or “squash” the tick. If allowed, the tick will walk away after removal when opening the claws.

The De-Ticker II is made out of a specialized, almost indestructible plastic material. Dimensions are 12 mm (0.46 inches) diameter and 95 mm (3.75 inches) in length. The inner claw, which is connected to the push button, is held within the sleeve by a spring. The claws are normally closed. By pushing the button, the claws open. The tension of the spring is adjusted such that the claw will hold the tick firmly during removal without destroying it.

This device was developed by MACOR Industries after research showed that ticks were in general removed—even by health professionals—through very ineffective, messy and dangerous methods. Utilizing a pulling motion frequently destroys the tick, leaving parts imbedded, causing infection or worse (engorged ticks “exploding” and similar), a procedure that just about everybody seemed to hate.

The conviction about—there must be a better way—resulted in research and testing—which demonstrated clearly that pulling of any kind is about the worst method of tick removal, but turning the tick instead of pulling showed very promising results. This observation became the core of further research that has assisted greatly in the development of the “gentle-turning method” for tick removal and the design of the De-Ticker in 1993. In 2000, the De-Ticker II was introduced.

The De-Ticker has become a real success story and is liked, used and marketed by veterinarians, pet supply stores, the outdoor industry, drug stores and others nationwide. It is protected by patents in the USA and Canada.

Uh oh. We lost track of where you are shopping at. Please re-select so that we can confirm your inventory is ready for you.