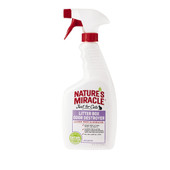 Nature's Miracle Ultimate Litter Box Odor Destroyer eliminates tough litter box odors AND airborne, fabric and hard surface odors! Nature's Miracle breakthrough formula reacts with tough embedded litter box odors destroying them on contact. Safe for use on all litter substrates and on multiple surfaces. Other pet odor eliminators simply mask the unpleasant odors from a single source, while Nature's Miracle breakthrough formula reacts with unpleasant pet odors destroying them on contact, on every surface. Spray in the litter box, in the air, or on surfaces such as litter boxes, litter box mats or anywhere your cat goes! Safe for use around pets and children when used as directed.

What started out as a quest for a preschool cleaning solution by our founder, quickly became the development of the most trusted stain and odor solutions. From the very beginning, Nature’s Miracle® stain and odor products became instant staples in the homes of pet parents everywhere. The enzymatic formula was unlike anything else on the market- utilizing pet and family-safe ingredients* to effectively remove pet stains and odors.

Can cause eye and/or skin irritation. If contact occurs. rinse thoroughly with water for 15 minutes. If irritation continues. seek medical attention. Harmful if swallowed. Do not spray directly on animal. KEEP OUT OF REACH OF CHILDREN.

Uh oh. We lost track of where you are shopping at. Please re-select so that we can confirm your inventory is ready for you.