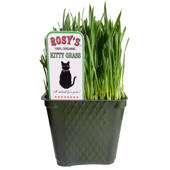 Rosy's 100% Organic Kitty Grass is a ready-to-eat blend of organically grown sprouted oat and wheat for pets. This nutritious “grass” is enjoyed by cats, dogs, guinea pigs, hamsters, rabbits, birds and reptiles. It's natural for animals, even carnivores, to have greens in their diet. Rosy's Kitty Grass provides a significant amount of fiber which helps keep the digestive tract running efficiently and helps your cat eliminate hairballs. The young sprouted grass also contains many healthy attributes including chlorophyll, enzymes, amino acids, vitamins and minerals.

Partners Nancy Fortner and Alan Salazar met in a horticulture class at San Francisco City College and began dreaming of starting a plant nursery. They moved to Sebastopol in December 1990, one of the coldest winters on record. After thawing out, greenhouses and coldframes were built and they began growing flowers, vegetable starts and herbs, concentrating on unusual and heirloom varieties. They were growing organic plants before it became the all the rage to do so. Many popular garden items in stores today may have gotten their start by appearing first at the Woodrose Gardens Farmer's Market stands, including organically grown lettuce mixes, mixed herb container gardens, and of course Kitty Grass!

Why do I need to choose?

The products you’ll be able to select are based on what your
neighborhood store has in stock. Let’s see what they’ve got!